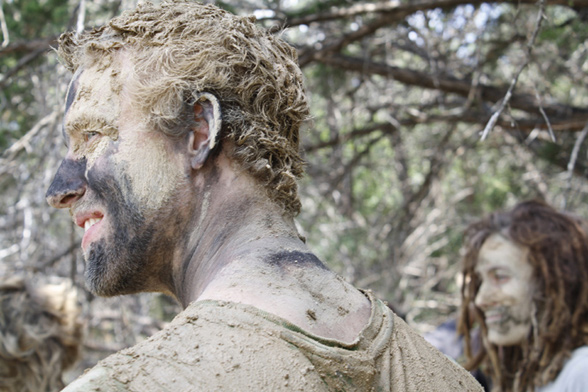 So. I’m standing there on a narrow wood platform about 4 feet off the ground, eyeing the rope hanging in front of me, and trying to muster my courage to jump out there, grab the rope with my hands and swing from it. Looked easy enough when the other scout students were doing it, gracefully jumping into the air and dangling from the ropes.

I stood up there for a couple of minutes, pondering the possible outcomes.  A moment later, I jumped out and grabbed the rope (yay!), but an instant later my grip vanished and with an impressive ‘oomph’ that could only belong to me, I did a knee-plant in the dirt.  While I am grateful it wasn’t a face-plant, I was still flush with embarassment around what I was now certain was a tribe of wood elves.

Relegating myself to balance practice while the other scout students swung from beams 15 feet off the ground, vaulting tree limbs, climbing ropes and scrambling up telephone poles into the trees; I vowed that this time I would be practicing in between these scout classes.

Clearly the most clumsy of the bunch, my feet crunch-crunched on the run as they silently glided past me in their Vibram 5 Toe shoes.  They hoisted themselves up and down ropes as though they could do it all day.  In turn, I felt like I’d suddenly grown a second left foot and was sworn to use that and only that.  When did that happen?  I have a lot of work to do.

Feeling embarassed and ox-like in the class, I blushed and tried to fade out of sight.  Once on my way home though, I thought about it and decided I like it enough to learn how to do it better.  Who doesn’t want to be light on their feet, flexible, strong and agile?  I do! I do!

Being a good scout involves not only being in shape, but also developing flexibile limbs that are strong and lithe.  Fingers that can grip branches and hold the body’s weight, legs that possess the strength to pull the torso up the ropes and feet that are nimble enough to fit in and twist through the crooks in trees, obstacle courses and footholds. Quadrapedal crawling and plyometrics help develop this.

A good scout must also be in control of their breathing and thoughts, to develop better awareness and also to be more difficult to detect.  We stood on rocks in the 6pm yawning sun to work on chi kung, working on proper breath, directing energy and building focus.

Good scouts are comfortable outdoors, in the trees, on the rocks, the brush, the water….  Blending into whatever their surroundings are, scouts simply seem to be part of the terrain.

Scouts are the eyes and ears of a group, often working alone in the woods, which I like.  There’s a certain romantic notion to the idea of moving through the woods unseen that is appealing.  But first, balance, strength and endurance.

1 thought on “The Scout Knee Plant” 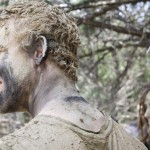