The backroads home are pitch black.  Its just me, driving home half an hour after the sun officially tucked in, with only a stain of pink left in the sky, paused and then erased into black.  There is only the occasional set of red taillights that I encounter as I drive, sailing over the curvy hills too fast, with a whoosh as the Blazer cushions back to road.

Earlier, I tried on the shoes of a woods scout and I liked it.  When I run, its me chasing something obscure away.  Before dawn or as the moon is rising at twilight and one foot after another; I follow the pavement hills, avoiding the ditches and counting off the steps.

But there in the brush, now that was something different.  Instead of skirting around all the obstacles, we went straight into them and worked with them in a flow, like a dance.

I am fresh from a long weekend in Liberty Hill where a sudden furious rainstorm dumped enough water on our outdoor classroom and field kitchen to double for WaterWorld.   I had laid my running shoes out on the porch to let them dry out.  They were caked in about an inch of mud-sludge, inside and out from my mad dash up the hill pre-dawn as the flash flood warning went out.  I was told there were sirens, but I didn’t hear anything.  Of course, the rain was so loud on our tenty/tarp that machine gun fire could have also gone undetected.

Today I looked at my shoes skeptically, all that mud now solid and hard — the ultimate camoflauge.

Standing amid the ashe juniper trees with 5 others, we discussed using the trees to increase flexibility, strength and agility.  Sounds great.  The ashe junipers are great trees, pretty friendly, and thankfully for short hermits like myself, low enough to the ground for us to just hop into. 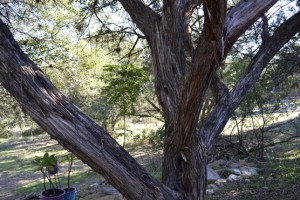 We all started stripping the dead branches away so that we could make our own tree obstacle courses.  Climbing trees was a favorite pasttime when I was a kid, but its been more than one summertime since then.   I cursed myself, thinking even those AMAZING MOROCCAN TREE CLIMIN’ GOATS were doing a way better, way more elegant, and less bleeped-out job than I. 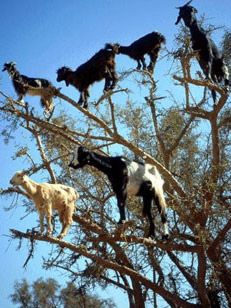 But then that falls away, and as the bark smooths out under my gloves and I get the hang of swinging around the trunk without drawing blood from my legs or donking my head on the overhanging branches … well, I get it.  Quiet and shry, there was only the sound of the birds, the occasional snap of a dead branch as one of us cleared it, and the thud of those vibran 5-toe shoes as one of the scouts descended from the tree back to the earth.

Moving slower and slower, I hung from the branches to stretch out my arms and shoulders until a deep ache set in.  A good ache.  The kind of ache you get when you are working and everything wakes up.

I watched some of the other scouts dashing through the underbrush to slide through the trees, scale them in a flash, swing over like a monkey and drop silently to the ground. They resembled wood sprites as the sun was escaping, with only a smudge of light left.

So now I drive home, pondering the difference between gliding in the trees and through the woods instead of running past it.  And I can’t tell you what a difference there is.  This is a pair of shoes I rather like.